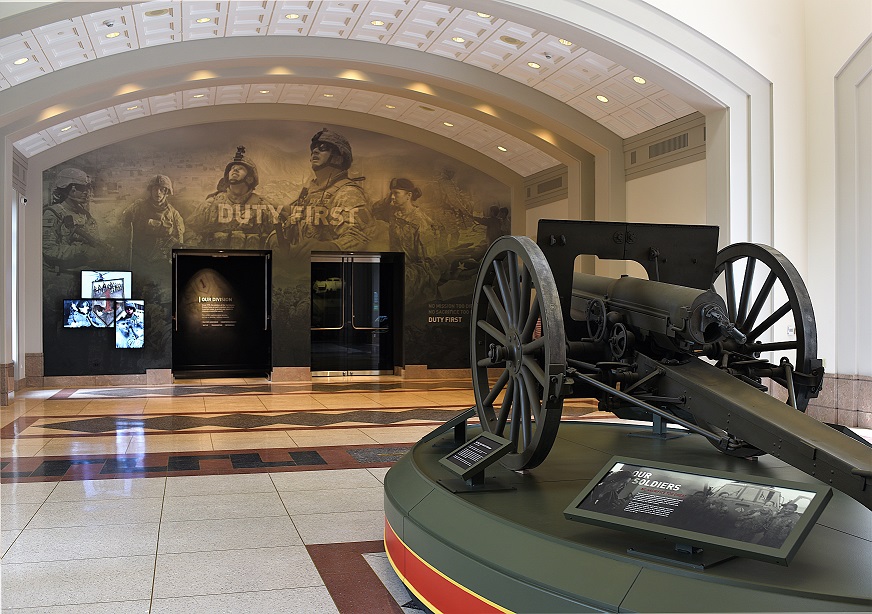 The First Division Museum at Cantigny Park in Wheaton will reopen to the public on Saturday, August 26, at 11 am. The museum began a transformational update last fall including the addition of “Duty First,” an all-new gallery focusing on the modern (post-Vietnam) history of the Army’s 1st Infantry Division.

After a ribbon-cutting ceremony, visitors will enter the museum for the first time since Veterans Day 2016. The experience awaiting them features new and updated exhibits plus cutting-edge storytelling techniques.

The “Duty First” gallery occupies the 2,500-square-foot space formerly used for temporary exhibits and programs. Inside it, visitors will learn about the different types of missions performed by the 1st Infantry Division today with the information, in many cases, delivered by the voices of military veterans. Interactive exhibits apply virtual reality technology that is sure to leave a lasting impression.

The First Division Museum’s other major gallery is “First in War.” This space, thoroughly updated with new media and more artifacts, will be familiar to previous visitors. Powerful immersive experiences remain intact, such as walking through a WWI trench, onto Omaha Beach and through the jungles of Vietnam.

As before, the compelling record of the Division is presented in the context of broader history, inviting museum visitors to engage in the tough issues of war and peace.

The museum’s grand reopening coincides with the 100th anniversary of the famed military unit known as the “Big Red One.” It became the first division of the U.S. Army in June 1917, assembling to fight in France in World War I. Colonel Robert R. McCormick served in the Division during the Great War, participating in the successful Battle of Cantigny in 1918. Returning after the war, Colonel McCormick re-named his farm Cantigny in honor of those who served in the battle, and on his death in 1955 left Cantigny Park in trust for the enjoyment of the people of Illinois.

“There is no better way to commemorate the centennial of the First Division,” said David Hiller, president and CEO of the Robert R. McCormick Foundation. “We know how Colonel McCormick revered the Big Red One, and all the men and women who served in the armed forces. He’d be pleased that this wonderful museum honors veterans and all those who serve.”

The renovated museum provides a comprehensive telling of the Big Red One’s service since the Vietnam era and allows for future updates.

“For 100 continuous years, members of the 1st Infantry Division have been all around the world, risking their lives on our behalf and in our defense,” said Paul Herbert, executive director of the First Division Museum. “We’re proud to tell that story here at Cantigny and we’re going to keep telling it for decades to come.”

The 11 vintage U.S. Army tanks outside the First Division Museum also will reopen on August 26. All of them have been cleaned and painted with historically accurate markings. Tank park renovation includes new plantings, walkways, seating and lighting. The grand staircase and entry plaza outside the museum’s front doors are new, along with other hardscape details surrounding the building. A picnic shelter south of the museum is nearing completion.

The First Division Museum has been a part of Cantigny Park since 1960. The original museum opened in what is now the Cantigny Park Visitors Center.

The museum’s much larger current home opened in 1992.

The museum will stay open until 8 pm on August 26. Regular hours are 10 am to 5 pm, Tuesday through Sunday. In November and December, the museum closes at 4 pm.

Museum admission is free with paid parking: $5 on weekdays, $10 on weekends through September. Parking is $5 every day starting in October, and free on the first Wednesday of every month.