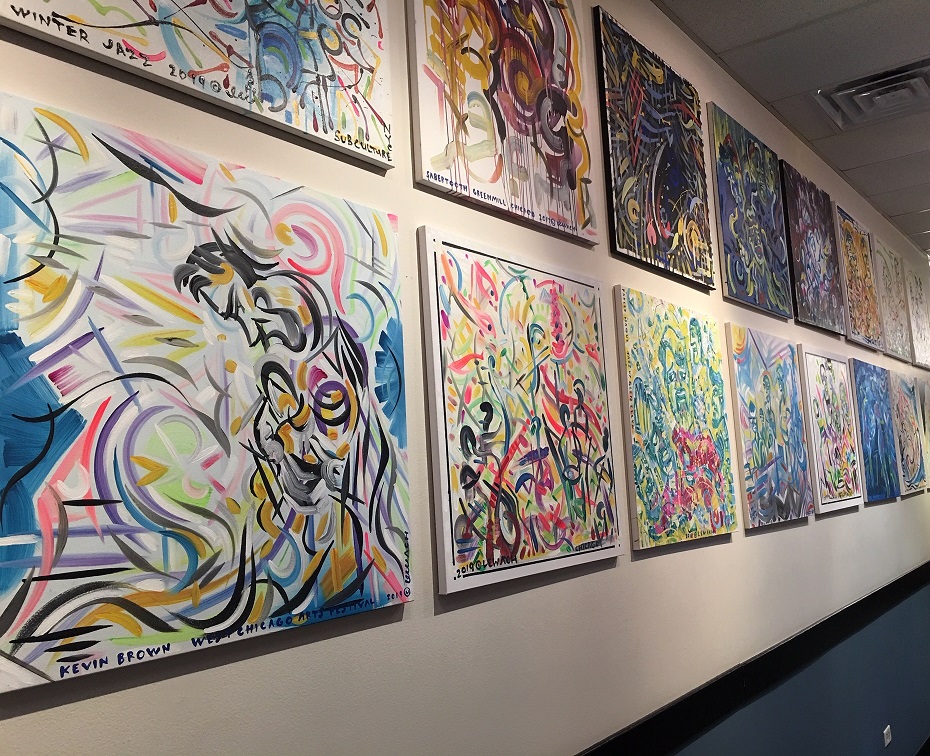 The work of artist Lewis Achenbach has been installed at City Hall, 475 Main Street in West Chicago, for a solo exhibition which runs through October 2019.

The artwork of West Chicago Cultural Arts Commission member and founder of the Jazz Occurrence Project, Lewis Achenbach, has transformed the interior walls of City Hall at 475 Main Street into a vibrant art gallery. Fifty pieces of original art, created at live music events throughout Chicago and the suburbs, have been installed for the enjoyment of those visiting and working at City Hall during normal business hours, Monday – Friday from 8:00 a.m. – 4:00 p.m.

Achenbach curated this solo exhibit, which he has titled Sonido Sólido, which translates to Solid Sound in English.  Many of the pieces stylistically feature the faces of jazz performers, some incorporate dance imagery included in the live performances, but all contain a connection to the frequency of sound captured by his brush strokes.

The exhibit will remain at City Hall through October 2019. Those wishing to see Achenbach at his craft melding visual and sonic art, may wish to save the date for Jazz Occurrence No. 18, on Wednesday, December 18, 2019 at Constellation Chicago.

specifically  contemporary classical, ambient and experimental endeavors. Lewis creates on-site, in-venue artworks that capture the frequency in the room. This practice has put Achenbach on a path of spiritual discovery that he shares through his formal Jazz Occurrence Project. A JazzO (for short) is a marriage of the sonic arts and visual arts, when the audience is invited into a site specific happening of artistic creation (the band plays and Lewis paints the music).

Acrylics on canvas, pastels on wood cradle and projected digital are his media/medium.

Lewis moved to NYC at 18, worked for Michael Sporn Animation Studios after graduating from NYU Tisch School of the Arts, moved to the Chicago suburbs and has been creating live art since 2012. A drummer once said, “You paint like I play”.

Achenbach was the resident visual artist for the Jazz Institute’s XIIV Made In Chicago Festival (Poznan Poland) 2017 and has worked with institutions MCA Chicago, the Art Institute of Chicago, Hyde Park Jazz Society, NYC Winter Jazz Festival 2019. He has been featured in articles by Howard Reich in the Tribune, Izzy Yellin In Downbeat and Neil Tesser in JAZZIZ magazine.

Achenbach has published two books, Hear This Book and the First Jazz Occurrence Coloring Book which includes a forward by Howard Mandel.

West Chicago is a diverse, family-oriented community with a rich cultural mix and a proud heritage. It is the first Illinois community established by the railroads and continues to be a convenient transportation hub served by three major rail lines, Illinois' third-busiest airport and three state highways. For more information, call Rosemary Mackey, Marketing & Communications Coordinator, at (630) 293-2200 x 139.