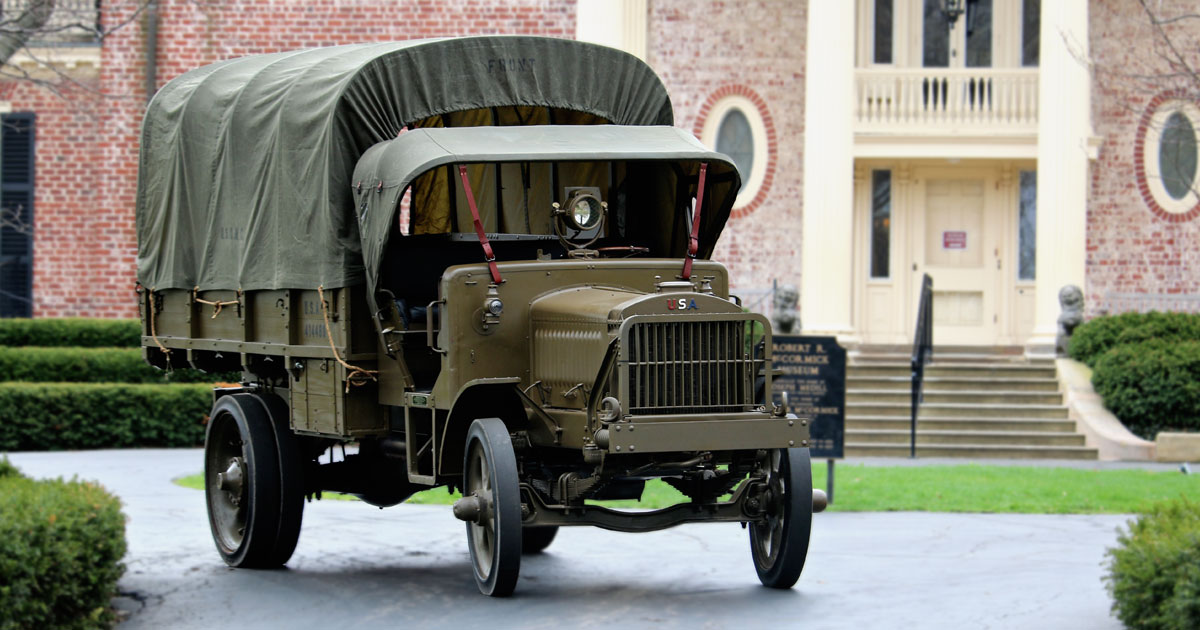 The First Division Museum at Cantigny Park is planning a warm welcome for more than 50 historic military vehicles and their owners on Tuesday, August 20. Their visit is part of a two-day stop in DuPage County during the 2019 Transcontinental Motor Convoy, sponsored by the Military Vehicle Preservation Association (MVPA).

The convoy—beginning August 11 in Washington, D.C., and ending in San Francisco on September 14—commemorates the 100th anniversary of the U.S. Army’s first motor convoy across the United States in 1919, along the famed Lincoln Highway.

“We began a partnership with MVPA back in 2009 when the 90th anniversary convoy stopped here on its way to California,” said Ian Richardson, historic vehicles program director for the First Division Museum. “They were so impressed with how we treated them that this time around, a decade later, they’re making a multi-day stop in Wheaton, specifically to enjoy the museum and the park. The MVPA has been good to the museum, contributing to the success of our own historic vehicle fleet.”

The restored vehicles will be staged at Cantigny Park from 10 am to 5 pm on August 20. Visitors are invited to come see them and interact with their owners, most of whom are veterans and collect military vehicles as a hobby. As MVPA members, they enjoy educating the public on the importance of the vehicles during their time in national service.

One of the vehicles on exhibit will be the First Division Museum’s own World War I “Liberty Truck,” which joined the museum’s fleet in 2018 following a lengthy restoration process. The truck is not in the convoy, but it does run—one of the few models of its kind that still function.

“The convoy participants are eager to tour the museum and I know a few are especially excited to see the Liberty Truck,” Richardson said.

Members of MVPA conduct convoys of various lengths throughout the year. Transcontinental convoys are uncommon and require many local support teams along the 3,200-mile route. Cantigny is pitching in by donating fuel for each historic vehicle and meals for the owners and their families.

The convoy riders will camp at the DuPage County Fairgrounds for two nights. Those who want to see the vehicles but are unable to visit Cantigny can stop by the fairgrounds on Wednesday, August 21, a convoy rest day. The vehicles resume their cross-country journey at 7 am on August 22.

About the First Division Museum at Cantigny Park
The First Division Museum, part of Robert R. McCormick Foundations, promotes public learning about America’s military heritage and affairs through the history of the “Big Red One”—the famed 1st Infantry Division of the U.S. Army. The museum’s main exhibit hall, First in War, transports visitors to the trenches of World War I, the beaches of World War II and the jungles of Vietnam. Outside, tanks are displayed from every era, along with artillery pieces and a personnel carrier. The Robert R. McCormick Research Center, open to the public, houses the museum’s library, archival and photo collections. For more information, visit www.fdmuseum.org.