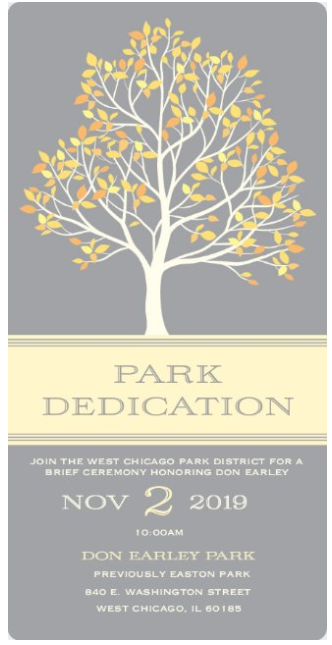 On Saturday, November 2, the West Chicago Park District will be officially remaining its first park (Easton Park) in honor of its first supporter Don Earley. A brief ceremony will be held at 10:00am at the new Don Earley Park located at 840 E. Washington Street in West Chicago.

Don has been a long-time resident of West Chicago where he met his wife Marilyn. Don and Marylin married in 1969 and created their family of ten with eight children from their previous marriages.  Don is a veteran of the United States Army and a graduate from Elmhurst College with a bachelor’s degree in mathematics and a master’s in Education administration from Northern Illinois University.  He was employed as a math teacher for 46 years of his life, 43 of those with the St. Charles High School system.  While teaching at St. Charles Jr. High he worked at the St. Charles Park District as a Director of Summer Recreation.

In 1972, Don spearheaded a committee named “Better Recreation for West Chicago” which presented a referendum to create a standalone Park District for the citizens of the town. Along with the creation of the Park District, voters were also asked to elect their first set of park board commissioners.  Don Earley was elected as the president, a position he serviced for one and half years, he remained on the board until 1979.  At the time of establishment, the park district had no employees and the future of the District rested on the hands of committed volunteers.

Don foresaw the potential of the new District and took the leadership of many projects that soon flourished into the beginnings of the District; the first purchase of Easton Park, establishment of the first office building and hiring of the first staff members. Successively, in 1976 Don Earley sought assistance from park commissioner Frank Lenertz to write and acquire the first grant for the Park District through the Department of Natural Resources,

the funds acquired allowed for the purchase of the second piece of property for the District now known as Pioneer Park. In 1978, Don and commissioner Mike Ginko’s efforts in Springfield led to the purchase of Manville Oaks, today known as Kress Creek Farms.  Don’s commitment to the District’s growth didn’t stop after his time as commissioner; he was also heavily involved as the treasurer for the referendum committee that eventually lead to the realization of the ARC Center.  Don has always been instrumental in the growth of the District; his assistance has been invaluable for the Park District.

Don’s dedication to the community of West Chicago went beyond establishing a Park District. He also served as Adlerman to the City of West Chicago for 12 years, city treasurer for 12 years, civil service commission for 2 years while also being an integral member of the Honor Flight committee of DuPage County which raised funds to be able to send WWII vets on the honor flight to Washington D.C.  He formed part of the “For the People Committee” whose mission was to bring people together to work cooperatively with each other to end violence and social stigma in the community. Over the years he has also been involved with St. Mary’s Catholic Church and the Knights of Columbus Council.

Don is a common household name in the community serving as a role model to many, specially to those in his family that have followed his footsteps in serving others.  His stepson Don Voelz also served on the park district board for over a decade and now his granddaughter Courtney Voelz is a current board commissioner. Don and Marylyn now have 12 grandchildren and 5 great grandchildren, and the District that he once envisioned has a total of 12 parks and a staff of nearly 300 employees along with innovative facilities and programs.

Don worked diligently to create something magnificent, when asked what his inspiration or mission was, he simply said “My only goal is to be a good citizen and help those that are in need”.  Park Commissioner Frank Lenertz stated, “I admire Don’s leadership and his ways of evaluating a situation in any area of life and finding ways to help and approach it actively. It is an honor to be dedicating the first park in West Chicago to the first man to fight for recreation in the community”.

About the West Chicago Park District

The West Chicago Park District was established in 1972 and since has been committed to creating an enhanced quality of life through effective programs, progressive facilities and preservation of parks and natural resources.  We are West Chicago Park District - innovative, dedicated, focused, creating community, achieving better results, impacting lives, ever evolving, moving forward, Here We-Go!  For more information, visit we-goparks.org.