A year ago, the student team from West Chicago Community High School captured the 2020 Illinois state LifeSmarts title, earning the chance to compete for the national title at an event which was subsequently postponed due to the pandemic. The rescheduled event took place virtually on April 17, 20201. West Chicago returned to battle against 23 other state champion teams for the national title and finished in 7th place. This teams best performance of the tournament was their victory over Florida 180-50.

The 2021 team from West Chicago Community High School participated against 33 teams competing for the 2021 crown. It should be noted that this team of all freshmen played extremely well. A highlight for this team was when they tied Rhode Island in a match 110-110. This Rhode Island team finished 3rd in the competition.

LifeSmarts, a consumer education competition that challenges teens in grades 9-12 about personal finance, health and safety, the environment, technology, and consumer rights and responsibilities,is a program of the 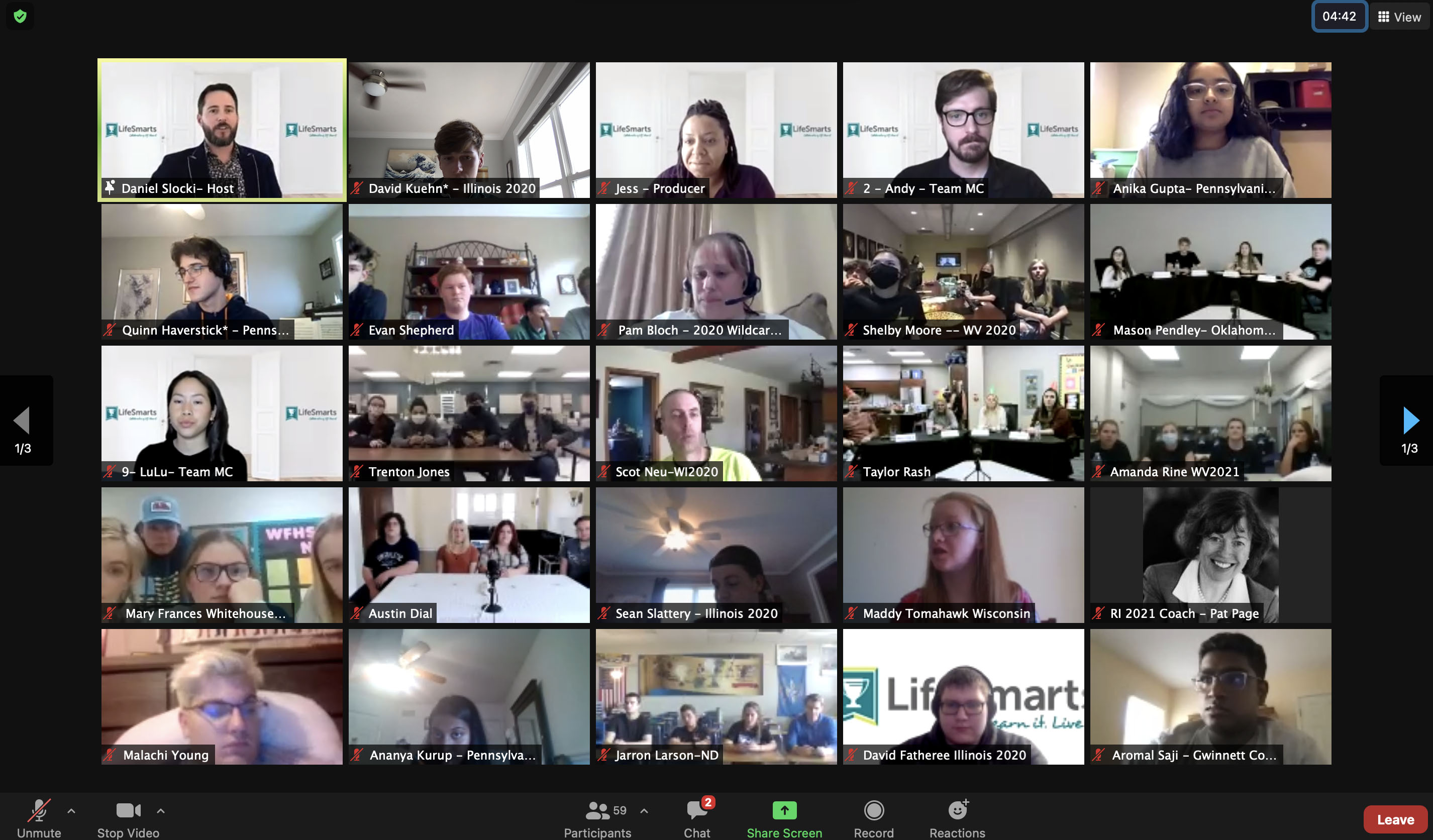 West Chicago LifeSmarts players representing Illinois are getting ready for an early round of competition. They are (from top to bottom) David Kuehn (top row 2nd from left), Sean Slattery (4th row 3rd from left), and David Fatheree (bottom row 4th from left).

National Consumers League (NCL). The program has been in existence for 27 years and West Chicago High School has competed for the last 24 years. In LifeSmarts, students compete online and in-person at the local and state levels leading up to a national event.

Both teams were coached by Don Zabelin. Assistant Coach is Marc Wolfe.

The Illinois LifeSmarts program is sponsored by the Illinois Consumer Education Association.

“LifeSmarts participants gain the consumer ‘smarts’ they’ll need to make it in the real world,” said LifeSmarts Program Director Lisa Hertzberg. “We’re proud to have the teens from West Chicago Community High School represent Illinois at the National LifeSmarts Championship and grateful to our partnership with the Illinois Consumer Education Association, which enables us to get these valuable life lessons to local youth.”

In more than a quarter century of education and competition, LifeSmarts has educated more than 1 million students about core consumer topics, helped students develop critical thinking skills, and provided leadership opportunities. LifeSmarts students also give back through a variety of community service projects.

“LifeSmarts participants win by learning to avoid common consumer pitfalls, navigate the government, and understand credit card jargon before they have to sign on the dotted line,” said Sally Greenberg, Executive Director of NCL, a Washington, DC-based national nonprofit watchdog organization. “We are proud of the resiliency of our 2020 and 2021 state champion participants and were excited to welcome them to the virtual stage.”