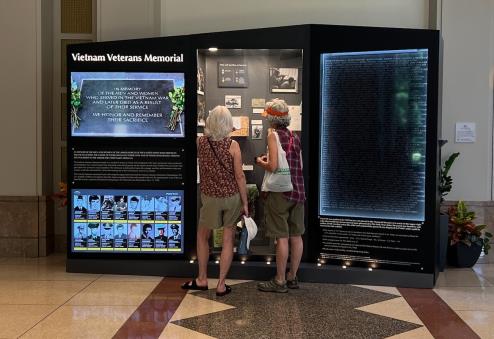 The First Division Museum at Cantigny Park is proud to announce the arrival of “Panel 44: Eight Days in March,” a traveling exhibit that commemorates the 40th anniversary of the Vietnam Veterans Memorial.

The exhibit, inside the First Division Museum until August 13, contains the original Panel 44 produced in 1982 for the Washington, D.C., memorial. It was never placed in the wall, however, due to a fracture in the upper right edge of the black granite. Many years later, the panel was found for sale online. The Vietnam Veterans Memorial Fund contacted the seller and acquired the panel, which was displayed at VVMF’s offices until its removal for this traveling exhibit.

The panel features the names of 335 American soldiers who died while serving in Vietnam between March 9-16, 1968.

A second temporary exhibit now running, also in the First Division Museum lobby, is The Mexican American Military Experience. The exhibit highlights the significant contributions of Latino soldiers who served in the U.S. Army’s 1st Infantry Division, known as the Big Red One.

The First Division Museum is open daily (except Mondays) from 10 am to 5 pm. This summer, the museum remains open until 8 pm on Tuesdays. Visit FDMuseum.org for additional details.

About the First Division Museum at Cantigny Park
The First Division Museum, part of the Robert R. McCormick Foundations, promotes public learning about America’s military heritage and affairs through the history of the “Big Red One”—the famed 1st Infantry Division of the U.S. Army. The museum’s main exhibit hall, First in War, transports visitors to the trenches of World War I, the beaches of World War II and the jungles of Vietnam. A second exhibit hall, Duty First, explores the 1ID’s history in more recent times. The Robert R. McCormick Research Center, open to the public, houses the museum’s library, archival and photo collections. Outside, tanks from every era are interpreted, along with artillery pieces and a personnel carrier. Solemn memorial markers and commemorative statuary also command visitors’ attention. The museum’s “Footsteps of the First” travel program, in partnership with Academic Travel Abroad, will explore Normandy and other key sites in Western Europe, October 6-15, 2022. Full details, including the itinerary and registration, are on the museum website.