ICCTA Executive Director Jim Reed recognized John Duffy, MSEd, for 45 years of service to District 509 and Elgin Community College. Duffy was elected to the District 509 Board of Trustees in 1975, holding every board office and serving on numerous committees during his tenure. 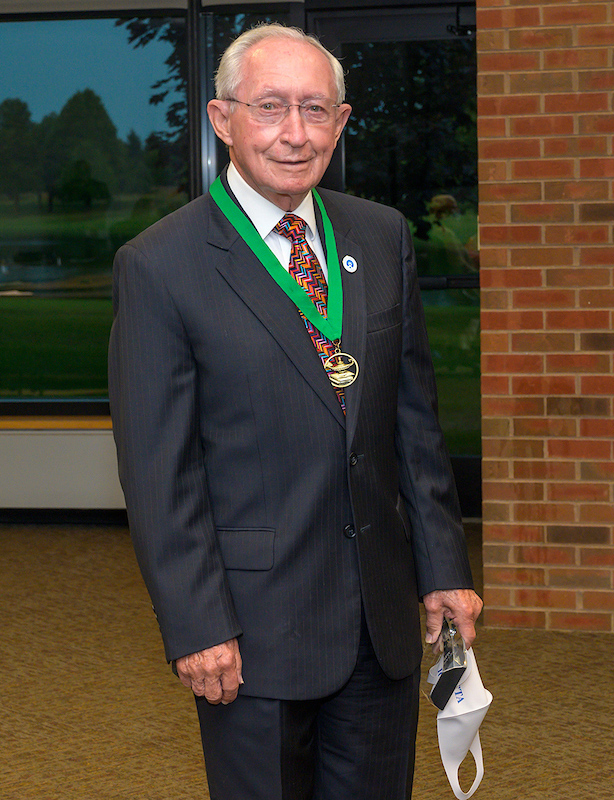 At the state level, he has represented ECC as a delegate or alternate on the ICCTA board throughout his years as a trustee. In addition to numerous committee assignments, Duffy chaired the ICCTA Federal Relations Committee seven times and served on the Executive Committee nine times. From 1983 to 1989 he was elected twice to the national board of the Association of Community College Trustees. After leaving the ACCT board, Duffy was appointed to the American Association of Community Colleges board from 1990 to 1993. From 1984 to 1993, he served on the ACCT/AACC Joint Commission on Federal Relations and chaired the Joint Commission in 1988-89.

In 1991, he was named ACCT’s Outstanding Trustee for the Central Region. He won the award again in 2002, which is the same year he received the ICCTA Ray Hartstein Trustee Achievement Award. Since 2000, Duffy has been appointed to various ACCT committees nine times.

Additionally, Duffy was awarded his fifth Trustee Education Award that recognizes the accomplishments of trustees as they maintain their commitment to lifelong learning and continuing education. Five-time recipients have participated in at least 60 ICCTA professional development activities during their tenure as trustees.

Duffy is a retired teacher from Larkin High School in Elgin, where he served 1962 to 1996.

ICCTA also honored Clare Ollayos, DD, for her 25 years of service at ECC. In addition, she received ICCTA's Linden A. Warfel Trustee Education Award for participating in 100 or more ICCTA seminars, only the sixth Illinois trustee to earn this distinction. Since her election as a trustee in 1995, Dr. Ollayos has been dedicated to promoting student access and success,

trustee development, and legislative advocacy. She served as the ICCTA President from 2006-2007 and currently serves as the ICCTA West Suburban Region chair.

Additionally, Ollayos was the ACCT Central Region Outstanding Trustee in 2009; the same year she received the ICCTA Ray Harstein Award.

Ollayos is a chiropractic physician with offices in Elgin. She served as a co-chair for the ECC Foundation 1993-94 Capital Campaign, and as past chair of the Elgin Cultural Arts Commission. For many years she danced the solo role of The Magician in the Lisa Boehm Ballet Theatre's annual performance of "The Nutcracker.”

Noting the distinguished service of Ollayos and Duffy, ECC President David Sam, PhD, JD, LLM, said, “Our community, and in particular ECC students both past and present, are fortunate to have such dedicated and passionate trustees as advocates. Under their leadership, ECC has grown into a world-class institution that provides students the knowledge and skills they need to achieve their dreams. I extend my gratitude and congratulations to them both for their remarkable service to our college.”
Photo credit to Mark Carriveau, Elgin Community College. 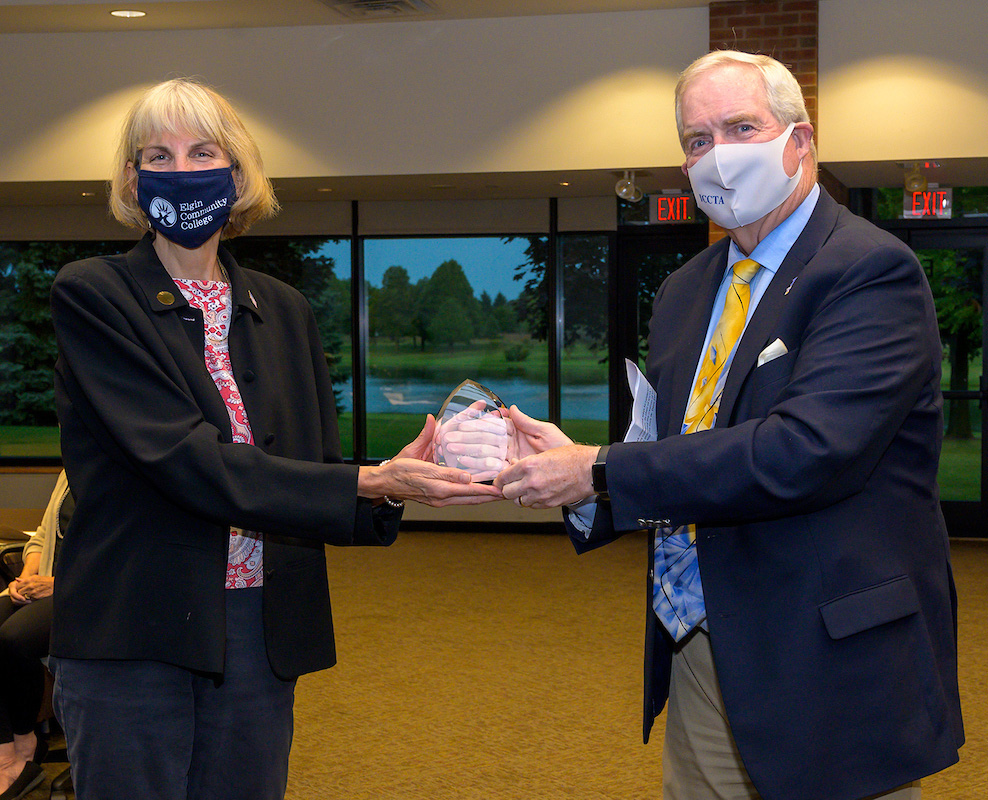 Elgin Community College (ECC) is a comprehensive public community college, one of 48 statewide. ECC serves approximately 15,000 students each year. Programs of study include 25 major fields for university transfer, more than 130 career-oriented, occupational degrees and certificates, corporate and continuing education, and a full complement of pre-collegiate courses. The three-year graduation rate exceeds the national average and the average of peer colleges.

ECC NEWS MEDIA PROTOCOL
All members of the media should utilize the communications department as the first point of contact. The communications specialist may be reached at 847-214-7828, or news@elgin.edu. All Freedom of Information Act (FOIA) requests must be submitted in writing to Marilyn Prentice, compliance officer, at mprentice@elgin.edu or via fax at 847-214-7375. This release is the official newshead for Elgin Community College. Any information received on behalf of ECC not on this newshead should be disregarded.